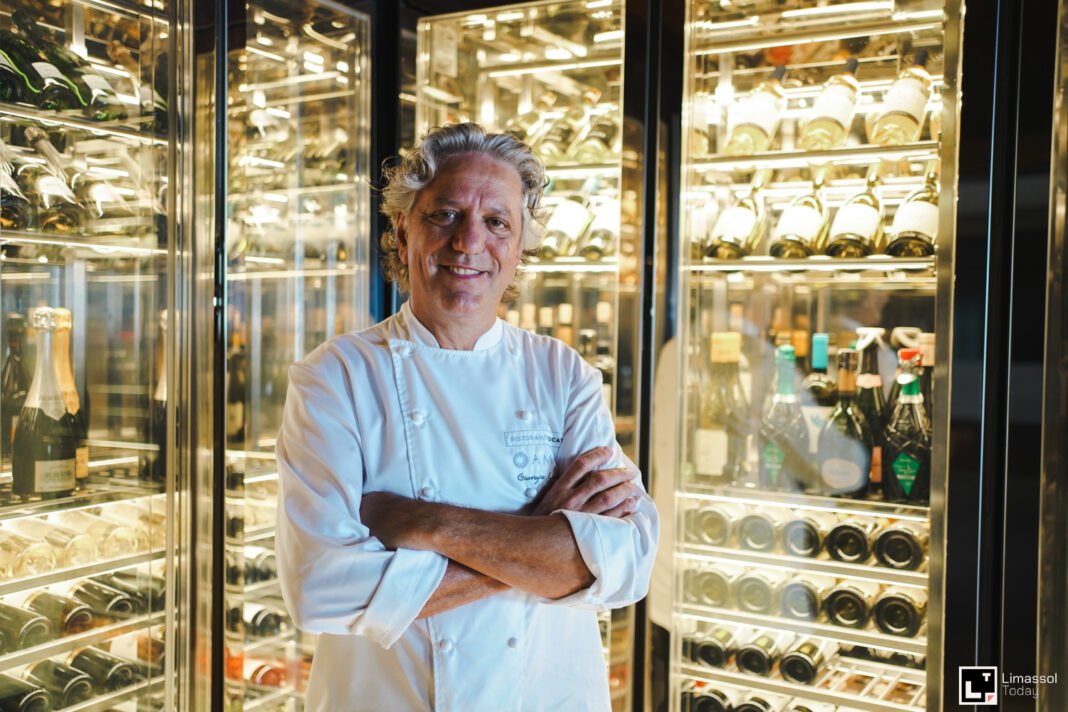 During his visit at his restaurant in Limassol at Amara Hotel, renowned chef Giorgio Locatelli gave us the pleasure and honor of meeting him and pick around his mind. We rolled this interview in, laughing about a ceramic statue that Chef Locatelli’s assistant brought to our coffee table. Chef Giorgio Locatelli standing on a big cooking pot. A gift from Naples he explained. They are known for making nativity scenes by creating ceramic figurines, it is their tradition. “Can you imagine how big of a nativity scene we’d have to build to fit this” he exclaimed comically. “I want to take it back to London but it is so heavy and I have limited luggage”, it seems as though Limassol will get to keep at least one piece of the real Giorgio Locatelli.

A warm and welcoming presence, Chef Giorgio Locatelli is much humbler than one might think. Maintaining the Michelin star status for twenty years hasn’t been an easy feat for the chef and his team but non the less it is a confirmation of the quality he wishes to preserve. A humanitarian with the utmost respect towards food and its importance for people he carries through the Italian principle of simplicity and community. We chatted all about food, Italian food to be precise and even got him to explain the secrets and historic value behind one of the richest pasta recipes in the world, carbonara.

Did you always imagine yourself becoming a chef? What drove you to pick up an apron and head to the kitchen?

Yes. I’ve never done anything else. Our family restaurant was 50 km from Milan and located in the lake area. People would come there for their weekend getaways; we did a lot of weddings and ceremonies like that. Obviously, everybody had to help on the weekends but I was too little to help in any other way, so I was sent in the kitchen. And that is where I spend my time ever since.

I’ve always been there. We must remember that to be a chef 50 years ago was not a very trendy thing. Actually, when I told my grandmother that I wanted to be a chef, she cried and begged me to become a waiter like my brother. But I just wanted to stay in the kitchen. I grew up in a kitchen practically. My first job was to peel potatoes and apples for the fruit salad, because with all the big banquets we’d have fruit salad. So, I had to peel like two boxes of potatoes for 200-350 people. I still beat the boys in the kitchen peeling potatoes and things, I’m still really fast.

In a previous interview you’ve admitted to almost quitting on becoming a chef. How troublesome was the beginning of your career?

I thought that if the top of being a chef is to be like them, those guys that I was working for, I remember thinking I’d rather do something else. It worked out for me in retrospect. I was very lucky. As my career developed, Italian food came to the forefront. Back then, Italian food was the little Cinderella behind French food, mostly represented by immigrants. There was no great professionalism, they went on different parts of the world and cooked their food. Now, I actually think Italian cooking is possibly one of the most widely eaten foods as well as Chinese and Indian.

I remember arriving in Paris and I went to work at a three-star Michelin restaurant because I wanted to learn more. I spent the first week there, in the office with the chef picking my brain about Italian food.

There was a distinct turning point. In the early nineties there was a big change and then French cuisine looked into Italian food. I was lucky enough to be there. To be in the right place at the right time.

A Michelin star is considered the ultimate honor for a restaurant as well as a chef, how difficult is it maintaining this status?

I’ve never cooked to gain a Michelin star. I cook what I like, I never cook things I don’t eat. I have a wide view of what is expected of me but I really try to cook what I like because I feel every dish must come with certain passion.

To keep your team focused on that, now that is the major job. Also, a lot of people come to us because we are a Michelin restaurant for an experience for like 1,5 or 2 years and then they move on. Which is what I did when I was that age. So, this is a very important thing, to keep everybody focused on that.

Honestly, I don’t find it that difficult, obviously you just have to be on top of it all the time. You cannot let things slip. Standards are very important for Michelin. For us the achievement is not the star. When you get the star, you’re obviously very happy but I just carried on doing what I was doing. Now that we’ve had it for 20 years it feels much more like an accomplishment because it means that for twenty years, we have been constantly paying the right amount of attention on that project.

Italian food, more specifically pasta is considered the ultimate comfort food. What is the secret to good Italian food?

With your years of expertise, which factors make the Italian cuisine stand out in a global scale? Is it the philosophy behind it?

Italian cuisine as one thing, it doesn’t exist. There are 24 regions, with 24 different micro-climatic conditions, different terroir. Today I am sure in Palermo they are eating something similar to here because it is the same temperature, in northern Italy in some place like Trentino-Alto Adige it has already snowed so, how can you have a cuisine that is the same. Obviously, there is not just one cuisine. There are historical factors, social factors and of the ingredients that define the Italian cuisine.

The Italians always seem to find that food is the only thing that makes them commune. They still share the table. The British and the Americans sit on a table, turn on the tv and they eat. The Italians still gather around the table, it’s still a moment of exchange – tutti a tavola. That is quite important. Modern society has turned food into fuel, the celebration of food is quite important, the conviviae.  It makes us human.

We’ve touched on the wholesomeness and simplicity of Italian food. What are your three pantry staples?

Definitely olive oil. There’s no good Italian food without olive oil. Even northern Italian cuisine, which is a lot more buttery and mid-European, is still heavily influenced with olive oil, that is the base. Then, I guess good flour, it is very important to a good pasta. We look at pasta the way you described it, as comfort food. So, if the pasta is made with good flour, it can have very good nutritional value. The difference between a plate of pasta made with good flour and one made with normal down the mill flour is more than the nutritional value, it is a completely different thing.

What is your take on fresh pasta versus dry pasta? Which one is better?

Here we go back to what we were discussing earlier, Northern and Southern Italy. Two completely different schools. Obviously, the pasta was developed quite late in the Italians. They have been eating pasta since the Etruscan time. In the North you have fresh pasta because you have abundance of eggs and richer ground, so obviously they made the pasta with the maximum nutritional value that they could.

At the end of the day, you have pasta that is suitable for certain sauces which reflects what the people have available around that area. Dry pasta is more of the southern taste. The area around Naples was very good at making pasta, and the reason was the drying conditions. At the moment it’s gone, obviously nobody dries the pasta outside, but they do have controlled drying rooms.

The idea that one is better than the other doesn’t apply. It depends on what you’re cooking. If for example I have to cook pasta with vongole, I will not use fresh pasta, but dry instead. Firstly, because the shells are going to break the fresh pasta and secondly the dry pasta can absorb 30% more sauce and what I want is to take up all these juices. Like in England, you know that the national dish is spaghetti Bolognese. Nobody eats spaghetti Bolognese in Italy. You eat tagliatelle, you need flat pasta that can encapsulate the sauce.

The shape is very important. The ergonomics of pasta. A cook that knows what he’s doing, will go home to his cupboard, choose the shape of pasta first and then he will decide which sauce to make. I still travel around Italy sometimes and see people making different pasta that I’ve never seen before, although I’ve been cooking for 40 years. You go and find something that only maybe 3 or 4 villages around are making.

What are the do’s and don’ts when it comes to making carbonara?

A, carbonara is a miracolo. This dish came around because after the 2nd World War the Americans arrived in Italy with rations, those were eggs, dry eggs and bacon. Those were two things the Italians didn’t have at the time, especially in the south. They had no eggs because they had no chickens left. That is how the carbonara was actually born, it is a recipe out of constriction and not the incredible creativity of some chef in a kitchen.

Some expertise exists there of course because someone must have thought they can use the eggs to thicken the sauce and that is very important, and from there it slowly developed. It is a miracle out of necessity.