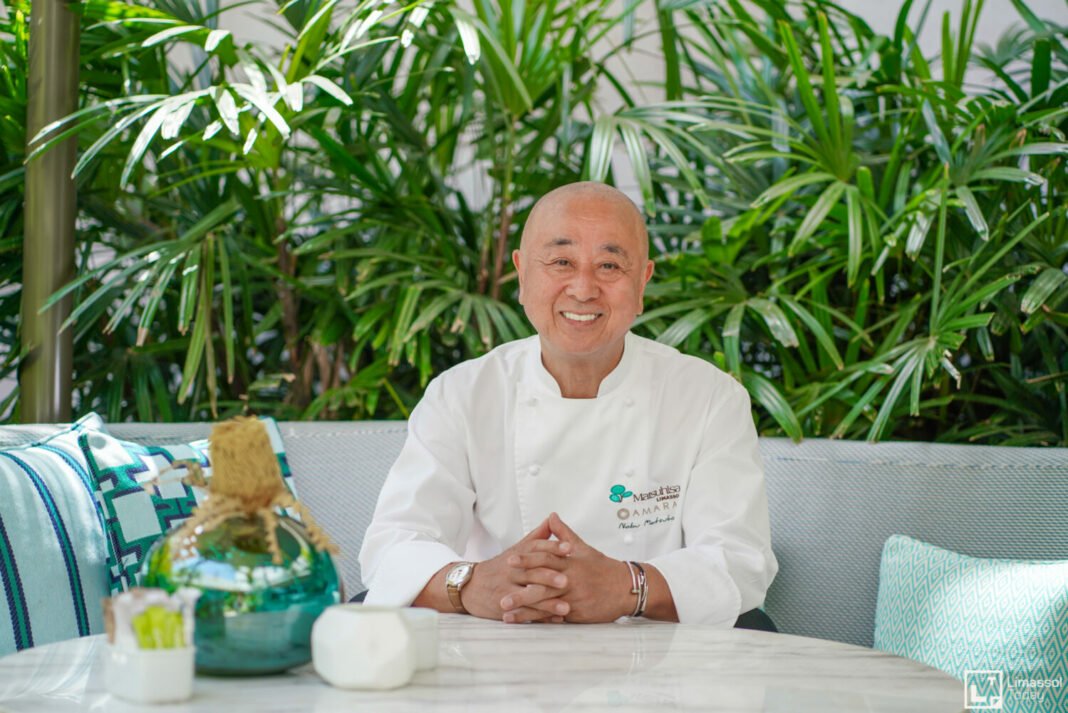 Further expansion of his restaurants in Cyprus is in the pipeline for celebrity chef Nobuyuki Matsuhisa who visited the island last weekend. The owner of more than 40 restaurants and 15 hotels in five continents paid a visit to Matsuhisa restaurant in Amara Hotel, which is part of his global empire, for the 2nd Nobu Festival. In an exclusive interview with Limassol Today, celebrity chef, restaurateur and business man Nobuyuki Matsuhisa, talks all about the Nobu festival, Japanese cuisine and the secret to his personal success. He also shares his opinion about Cypriot cuisine. For Nobu Matsuhisa food is an international experience. For over 30 years he has been on a mission to transform this statement to an interactive experience through his own restaurants as well as his cooking.

You have spent the last 3 days here in Amara Hotel for the 2nd Nobu Festival. And your next stop will be Mykonos for your 19th Nobu Festival. What is the philosophy behind these festivals?

We have restaurants all over the world. Matsuhisa is my surname, which means my restaurants are kind of like my kids and I like to see them once or twice a year.

Usually, I am travelling all year long, but since the strike of the pandemic in 2019 I haven’t had that luxury. After all this time, the United States, Japan and so many other countries are opening back and we finally have the opportunity to travel again.

When visiting one of my restaurants I like to show as much as possible to my customers and my guests, as well as introducing new dishes. I am here to introduce the Matsuhisa restaurants, and in this case Matsuhisa Limassol, so when people come to my restaurants, I am not the main attraction.

You own more than 40 restaurants on five continents including hotels. Is there a secret to your success?

My life is not calculated like mathematics, where one plus one equals two. My philosophy is that regardless of what I am doing, I try my best. If I do my best people will support me, but if I just kick it back and leave it all to luck then I lose that support. It scares me to just leave things to chance, I like to keep moving. Even one centimetre forward at the end of the day, will make me happy. As a chef, success is when I see my students become chefs and open their own restaurants. This way their success becomes my success.

You chose Amara Hotel to operate one more of your Matsuhisa restaurants. Tell us a few things about this collaboration.

This hotel opened in 2019, I remember even the president of Cyprus was present. Brand new hotel, brand new restaurant. All was new. Now, three years later and after the pandemic everything feels a lot more settled. Even the trees have grown. I feel like Limassol has done a good job.

Are there any thoughts for further expansion in Cyprus? Is there a possibility for a second Matsuhisa restaurant opening?

We are thinking about a new restaurant but it is still too early to say anything for sure. It’s in the pipeline. The approach for any new restaurants doesn’t come from me directly. A collaboration with a hotel makes everything easier. The location is already there, you just put the money and it becomes a beautiful restaurant. But beyond the restaurant being beautiful, who works? Who makes the business? People. Chefs, management, even the dishwashers, waiters, bussers, the whole team. I like building strong teams. There is a step-by-step process for everything.

What does food mean to you?

Food is very important. People have to eat. Cooking in a restaurant is not like cooking at home, because people come here to spend their money and to enjoy their time. My cooking philosophy, at the restaurant and even at home is, to use the best quality products. Also, I practise Japanese cooking which means very simple cooking. It’s not rich but it’s very simple and healthy. Matsuhisa restaurants’ background is Japanese food and, in this way, I like introducing people to the Japanese culture. Cooking is my whole life and I like to cook with my heart. Therefore, the philosophy is very simple. Good food is good quality products and cooking from the heart.

There’s a lot of arguments in the food world at the moment about cultural appropriation and people cooking food that’s not from their own culture. What are your thoughts on this?

We are all international. Different languages, nations, cultures but I like to think that we’re all the same. For example, 20 years ago, many people did not know what Japanese food was and now it has inspired people from all over the world. Cyprus food hasn’t had its moment, yet, but people like Cypriot food because it is simple.

I studied in Japan and then went to Peru, more than 45 years ago. At that time nobody knew about Peruvian food, they knew of Peru as just another country. Ceviche, Andicuchos, arroz con pollo, have since become very popular dishes. When I opened my first restaurant Matsuhisa Beverly Hills, in 1987, that is what I introduced in my menu and customers were asking, what is this?

My Japanese cooking style, combined with Peruvian ingredients established something unique. After people caught up with the Peruvian cuisine, that inspired them as well. My job is to introduce another country’s food to the world. Any nationality, culture or food, has the potential to be all over the world.

Who is Nobu Matsuhisa

Nobuyuki “Nobu” Matsuhisa is a Japanese celebrity chef and restaurateur known for his fusion cuisine blending traditional Japanese dishes with Peruvian ingredients. In 1987, he opened his own restaurant “Matsuhisa” on La Cienega Boulevard in Los Angeles, California. It was in the Matsuhisa he came to know Robert De Niro, who encouraged him to open a restaurant in New York.  As cited in his memoir, Chef Matsuhisa kept turning De Niro down for four years until he called him home and said, “So, Nobu, how about it?” By 1994, he laid the foundation to a new restaurant chain, as he opened the first “Nobu” in Tribeca, New York in a joint venture between Robert De Niro, Drew Nieporent, Meir Teper and himself.

*Special thanks to Amara Hotel for their hospitality towards the Limassol Today team during the interview process.